Armenia has lost, but we must not lose Armenia 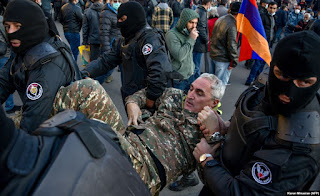 Little that has occurred in Armenia during the past week or so is clear from my distant perch except that the people of Armenia are shocked and angry, and many feel betrayed by their own government.

Just how angry they are and what the effect will be is hard to gauge. But calls for the prime minister’s resignation—possibly even his head—are coming from well beyond the country’s deep and slimy pool of deposed oligarchs and political opportunists.

Shocking scenes have been streaming from the capital since peace terms ending the six-week war were announced Nov. 10, including a mob that dragged the speaker of parliament from his car and beat him senseless.

Developments since then have been a blur: the prime minister ducking in and out of hiding, members of his party resigning government posts, police breaking up demonstrations in the capital and arresting opposition leaders.

Further roiling the situation are rumors of a foiled coup, perhaps even an assassination plot.

As sad as I was about the war, I’m almost as sad to see Armenians now attacking other Armenians because it could portend a far greater loss. We know the lessons of our history and yet we ignore the most important one: our divisions only make us weaker.

Armenians would do well to remember that we aren’t the only ones with access to live-stream video. The already jubilant Turks and Azeris must be cheering wildly as they watch Armenians at each other’s throats.

Fortunately, there are calmer voices in Armenia and in the diaspora addressing the obvious questions of how this calamity occurred and what can be done to secure Armenia’s future. I’ve read a lot of smart observations but none point to an easy path forward.

The invasion that began Sept, 27 was hardly unexpected after years of threats, ceasefire violations and outright attacks as Azerbaijan repeatedly tested Artsakh’s will and readiness while tapping its oil-rich treasury to acquire advanced weapons systems.

Yet Armenia was evidently unprepared for the scope and ferocity of this war, which left much of historic Artsakh in ruins. The human toll is even greater, including more than 2,000 Armenian fighters dead. 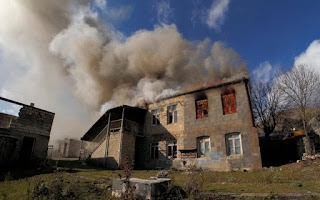 Tens of thousands of civilians who just weeks ago were encouraged to expect victory have been forced to flee, many burning their own homes to keep them from being occupied by the invaders.

Armenia was just as clearly unprepared for the imbalance of foes versus allies. The former included not only Azerbaijan but Turkey, which provided weapons, air support and tactical guidance. Azerbaijan’s troops were also bolstered by mercenaries from Syria and Afghanistan and most likely Pakistani special forces as well.

As for Armenia’s allies, none were evident.

One sobering reality crystalized by this war is that Armenia stands alone. Armenians always have, yet we repeatedly delude ourselves by thinking the world’s sympathy will translate into action.

The deus ex-machina is a Greek invention but we Armenians have embraced the idea that some greater force will appear out of the blue to rescue us.

If so, it won’t be the Russians.

Many Armenians around the world expected Russian President Putin to halt Azerbaijan’s advance if only to block Turkey from gaining a foothold in the Caucuses.

The depressing reality is that while Putin and Turkey’s President Erdogan remain at odds in Syria and elsewhere, they get mighty chummy wherever their interests align—and they align all too neatly in Artsakh, where both want to assert influence.

The terms of Armenia’s surrender—let’s be honest and call it that—allow Russian forces to occupy the war zone as “peacekeepers.” Ominously, Turkey insists it will partner with Russia in that effort.

While Putin offers assurance that Turkey will have no direct role alongside Russian troops, a joint center to “monitor” the ceasefire is being set up and Turkey is sending fresh troops to Azerbaijan.

So the fighting has ended with about a third of Artsakh lost—including the strategically vital city of Shushi. Turkey will now be positioned to Armenia’s north and east as well as west. The terms also provide for a corridor between Azerbaijan and Nakhichevan, exposing Armenia’s southern flank and potentially blocking its border with Iran.

It’s an understatement to call this a disasterous deal for Armenia unless you accept Prime Minister Nikol Pashinyan’s argument that it was the only way to stave off a far greater loss of life and territory—perhaps the only way to save Armenia itself.

A gifted and even inspiring speaker, Pashinyan is a former journalist who came to power by channeling a popular reform movement into a so-called velvet revolution a little over two years ago.

More people might have rallied behind him once again if he hadn’t raised the white flag over Artsakh in the middle of the night and then vanished. He waited days before trying to make his case by video and social media.

His position was further undercut by revelations that he acted on his own without consulting key members of his government and made no attempt to achieve consensus with the other parties before signing the agreement.

Pashinyan’s behavior since has been troubling, including a message he sent to troops that many people interpreted as a call for them to return and occupy the capital. Equally problematic may be his failure to anticipate the scope of the emerging disaster until it was too late.

The Armenian people will render a judgment on Pashinyan—elections may be coming soon—but fairness as well as prudence requires consideration of mistakes that preceded him. The biggest may be the belief that Armenia’s victory over Azerbaijan during the previous war was a reliable predictor.

No one questions that Armenian troops fought bravely and well once again despite tremendous odds but success in modern warfare can have as much to do with computer bots as combat boots.

Military analysts say this may be the first war in which drones were the decisive factor, and Azerbaijan had all the drones it needed thanks to Turkey and Israel. You can see the results in YouTube videos of Armenian tanks and troops being obliterated by swarms of these monstrous mechanized locusts.

Drones are just one of the glaring insufficiencies in Armenia’s old-tech arsenal, their absence mostly obscured in the public mind until now by the glitzy but ineffective purchase of a few Russian jets and obsolete missiles.

As American political consultant Eric Hacopian wryly noted, Armenia’s drones are in the Swiss bank accounts of its corrupt former rulers who drained their fortunes from the public treasury.

As others call for Armenia to search for loopholes in the peace agreement, or even reject it outright, Hacopian urges Armenians to focus on the future by developing their own drones and other defense systems to prepare for the next war. Do you doubt there will be one?

Russia’s peace-keeping terms have a five-year limit. We know how Turkey and Azerbaijan will use that time. What we can’t know is whether they’ll wait that long to attack, or what bargain Putin and Erdogan will strike in the meantime.

We can be certain only that Armenia won’t be consulted.

So I think Hacobian is right, cost be damned. That’s easy to say from this distance but I’m confident Armenians around the world will do what’s required.

We have the skills and the knowledge to match Armenia’s enemies. We’ll dig deep into our pockets to help pay for Armenia's defense, just as we will help pay to resettle the homeless.

Despite the war's ugly conclusion, I am optimistic. I believe Armenia’s future is assured by the resilience and determination of the Armenian people.
I have no other choice. The current circumstances make my reflexive realism almost unbearable.
Posted by Douglas Kalajian at 11:13 AM