Merry Christmas to everyone. This really isn't late—at least, not if you're an Armenian.

Happy New Year, and Merry Christmas. No, I didn’t get that backward as so many people around the world do. 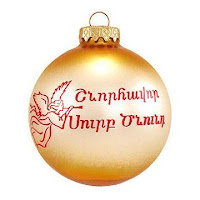 For Armenians, New Year comes first and it comes with all the goodies: food, songs, laughter. It’s also the time when our version of Santa, Gaghant Baba, brings gifts for the kids.

Traditions vary by region, but all Armenians greet the coming year with hope and good cheer just like everyone else.

The big difference is that afterward we still have a few days to get sober and serious for Christmas.

The Armenian Church celebrates Sourp Dznount, the Holy Birth, along with His baptism on Jan. 6. It’s a day for prayer, not presents. That probably sounds odd to most Christians in the West who are conditioned to think the birth of Jesus should be honored with a discrete date preceded by a month-long shopping spree.

We Armenians may earn fewer reward points on our MasterCards but we hope our devotion will earn a few bonus points on the score card that really counts.

So we follow the practice outlined by distinguished church historian Malachia Ormanian, a Roman Catholic theologian who converted to the Armenian Church and served as patriarch of Constantinople from 1896 to 1908. Ormanian noted that the early, universal church celebrated Theophany as the year’s first holy festival.

Beginning on Jan. 6th, the octave of Theophany concludes on the 13th and unites “all the mysteries which preceded the gospel life of Christ,” according to Ormanian’s The Church of Armenia.  “There are thus brought together into this one solemnity the Annunciation, the Birth, the Adoration of the Magi, the Baptism, and the revelations by the Jordan.”

That’s a lot of wonder for mere mortals to ponder in one intense stretch, so it’s no surprise that the Roman church and others eventually divvied up the Christmas pudding and got the glorious snow ball rolling in December.

But the world’s first Christian nation remains one of the last to follow the ancient tradition, so we Armenians really do get 12 days of Christmas.

Like most Armenians in this country, my parents’ holiday practices were thoroughly Americanized by the time I unwrapped my first Tonka toy under a tinsel-trimmed tree in the 1950s. As the old saying goes, when in New Jersey . . . well, something like that.

As with many of our cultural accommodations, the celebration of Dec. 25 was a bonus rather than a loss. My father explained that Christmas in December is an American holiday as well as a religious commemoration.

We were Americans, after all, so why not hop on the holiday wagon ride?

But we never missed church on Jan 6th (or the closest Sunday), and he told me all about the Old Country celebrations of Christmas and New Year that he remembered as a boy, including visits from Gaghant Baba.

Looking back now, it’s obvious that his reminiscences were idealized. Even Rudolph couldn’t light a path through the roiling landscape of his childhood in a time of genocide, famine and flight.

Lucky me, my memories of childhood years ending and beginning are all real and wonderful, including an annual mountain of beeping, whirling toys—more than enough to satisfy two traditions.

And, of course, our holiday meals were always two meals: a traditional American feast of turkey or ham with all the trimmings was paired with an equally bountiful meal of lamb and pilaf. 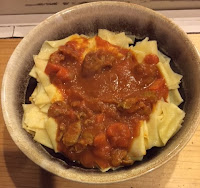 I see no reason to make an either-or holiday choice, so my wife and I did our best to uphold both traditions while our daughter was growing up and we continue now that she’s off hosting her own feasts. This year, she hosted us.

We managed to fuse the Armenian and non-Armenian components into one meal, as we topped her hand-rolled pasta with braised lamb.

We had a blast, of course, as just about everyone does at Christmas, yet so many people then feel guilty afterward. I think about this whenever I hear someone grouse about the American commercialization of Christmas, or when I see one of those bumper stickers that says, “Remember the reason for the season.”

Armenians don’t need such reminders. Having kept the gifts and glitter separate, we won’t be distracted today from remembering and honoring the true founder of all feasts.


Merry Christmas to all!
Posted by Douglas Kalajian at 4:01 AM 3 comments: