At Armenia's Genocide memorial, the nation's glory and tragedy are fused in a single vision 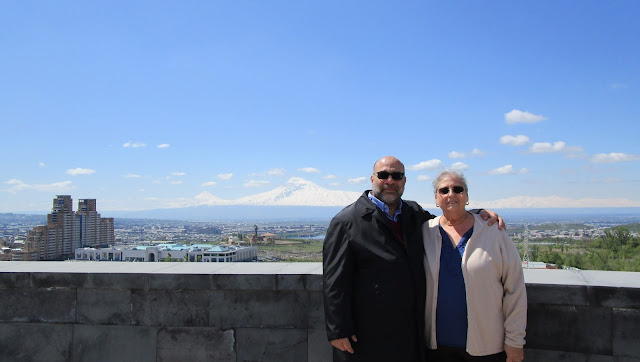 Robyn and I arrived in Yerevan about 1:30 a.m. Wednesday April 22, hoping for relief from the damp cold of London and Paris.


I’d started sniffling the week before, and now I was sneezing. I needed sunshine and rest so I could work up enough strength to dislodge the cold that was clearly finding the space between my ears a bit too cozy.

My sub-tropical fantasies ended with the first chilly steps outside the airport terminal. On the way to our hotel, my wife asked our driver if he thought the weather would improve for that Friday’s commemoration of the Genocide's centennial.

Dawn unfurled just enough clear sky to encourage a stroll through the city streets later that morning. We got a close-up look at preparations for a series of extraordinary events that were already drawing crowds to every hotel in Yerevan and knotting traffic at most intersections.

Two of these were scheduled for the next day. First, the 1.5 million martyrs of the Genocide were to be canonized as saints of the Armenian Church, followed by a heavy-metal concert performed by System of a Down. If you don’t sense a connection, you’re probably unaware that the band known to zillions of fans as SOAD is not only all-Armenian but deeply committed to raising awareness of genocide around the world.

Soldiers, flags and flowers lined the avenues as vendors positioned their carts to hawk ice cream cones, sodas and sandwiches. It appeared that everyone in the city was better prepared than we were.

Our last-minute travel decision had left no time for tactical planning. We tried to arrange a drive to the cathedral at Etchmiadzin for the canonization only to learn that the roads would be closed. It wasn’t clear how much of the 10-mile distance we’d have to walk, or whether we’d have a saint’s prayer of getting into the cathedral.

So instead we joined a throng in Republic Square, where the service was shown larger-than-life on a high-definition screen. We both shivered at the sound of the heavenly choir, and we kept on shivering as God’s tears fell with the full force a century’s sadness.

Robyn and I were drenched by the time we headed back to our hotel, but we were the only ones who left. The crowd continued to build as SOAD prepared to take over the square. An estimated 50,000 people spent the next several hours rocking, cheering and singing along in a driving rain.

We were not among them.

I cracked open the window of our hotel room and let the stage amps a block away do the rest of the work. Interest in the concert was so great that Rolling Stone magazine streamed it live, and I managed to click in with my iPad so we could see as well as hear the band.

I did my best to rock along as Robyn, Aram and I sipped Armenian pomegranate wine, which warmed me up but not as much or as soon as I’d hoped.

I woke up the next day feeling miserable, which was appropriate on April 24 but still inconvenient. Robyn brought me a cup of tea and persuaded the housekeeper to round up every available box of tissues. I spent the day in the room emptying a couple of boxes while watching the commemoration ceremonies on TV.

At least I stayed dry while Robyn and Aram toured mountainsides shrouded by fog and mist. By the time they returned that evening, Robyn and I were sneezing in harmony.

We authorized Aram to represent us in the annual torch-and-candle procession from Yerevan to the Tsitsernakaberd Memorial Complex on a hilltop overlooking the city. The procession started at 10 p.m. and reached the memorial at 12:30 a.m.

By then, thank goodness, I was well on my way to my first semi-decent night’s sleep in days. As a result, I picked up a little strength by Saturday while Robyn hadn’t yet lost all of hers. We hired a driver and guide and we set out for Tsitsernakaberd, where dignitaries from around the world had gathered the day before. Our visit turned out to be anything but anticlimactic. 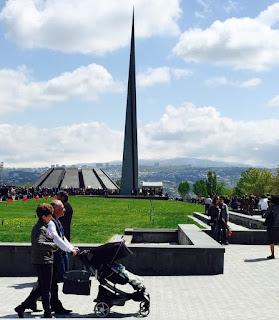 In addition to a soaring monument and tranquil gardens, the memorial grounds house The Armenian Genocide Museum, which had been under renovation since 2011. Our visit occurred on the day it reopened to the public, and the public turned out in numbers that spoke eloquently of the Genocide’s utter failure to eradicate the Armenian people.

Again, the roads were closed but our driver persuaded a security guard to let him ferry these weary Americans to the memorial’s front gate. 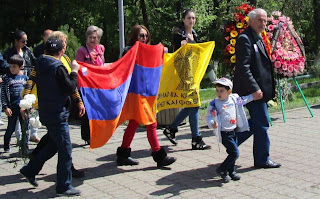 Thousands of others walked much greater distances, not only from Yerevan but from outlying villages: classes of school children, troops of scouts, military units, families spanning generations.

Nearly all came bearing flowers, which they carried to the memorial’s eternal flame set at the center of a step-down chamber. 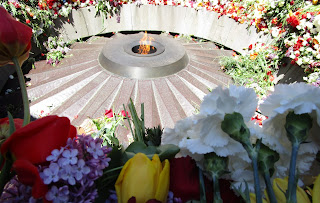 When we arrived, the wall of flowers was already so high and deep that we couldn’t see the flame. We couldn’t even get a picture of it until my friend Aram, much taller than I am, hoisted the camera over his head and shot blindly.

The museum's displays of documents and photos were exceptionally well-presented. For me, the most powerful exhibit was the etched wall map tracing the Genocide’s path. Everyone walking past silently focused on his family’s village and wept.

For all this, our most emotional sighting of all was the image that looms permanently over Tsitsernakaberd, and really over all Armenians everywhere in the world: Mount Ararat.

You know the story of Noah’s Ark. Armenians take it literally, as we do so many things. We believe one of Noah’s descendants, Hayk, was the founder of the Armenian nation, which is called Hayastan. For us, Ararat is the symbol and source of everything Armenian.

Robyn and I got our first full view of the great mountain on this first clear day of our trip. You can see it head-on from the bluff at Tsitsernakaberd, standing brilliant and snowy white against the blue sky no more than 30 miles across the valley.

It’s tempting to employ a cliché and say you feel as if you could touch it, but Armenians know better. Mount Ararat is locked beyond a sealed border in Turkey.

I asked our guide, the very smart and helpful Anna, how she felt looking at Ararat and knowing it wasn’t part of her country.

“It will be again,” she said without hesitation.

Armenians have a marvelous ability to see beyond, or maybe around, the ugliest of realities. Given our history, what choice do we have?
Posted by Douglas Kalajian at 12:47 AM