How could anyone think Jerry Tarkanian would ever throw in the towel?

You don’t have to be a sports fan to know the name Jerry Tarkanian. 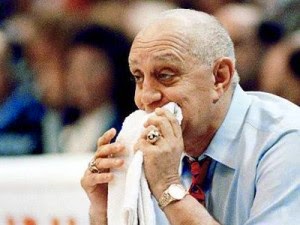 Tarkanian, who died Feb. 11 at age 84, made headlines for years as one of college basketball’s greatest coaches. While he became famous for his lopsided record (761 wins /202 losses), he became familiar as the bald-headed guy who chewed through towel after towel as his teams raced up and down the court.

Tarkanian might well be remembered as an entirely lovable character except for this: The people who ran college basketball clearly did not love Jerry Tarkanian.
I always thought that was funny in a culture where winning is revered above all else. But after reading his obituaries, I don’t see anything funny about the way Tarkanian was bullied and ultimately betrayed by the sport to which he devoted his life.
One of the many anecdotes illustrating that devotion has stuck with me for years: Tarkanian once encountered a distraught colleague while crossing campus after practice. Tarkanian asked why he was so upset. The bewildered professor wondered aloud if Tarkanian could possibly not know that the space shuttle had blown up.
Tarkanian’s response: What’s a space shuttle?
The point was that there was precious little room in Tarkanian’s life for anything—or anyone—that didn’t dribble, pass or score, He watched basketball, read about basketball, talked about basketball and most likely dreamed about baskeball.
He’d been that way since childhood. Tarkanian grew up in the Armenian immigrant enclave of Fresno, California, son of a Genocide survivor. As Tarkanian told it, his mother “fled her homeland on horseback with only the clothes on her back after her father and eldest brother were beheaded by Turkish soldiers.
He was 13 when his father died, and his mother eventually remarried. His step-father insisted the boy’s sport obsession would be his ruin. He told Jerry to become a barber. His mother, however, stood by him as he played basketball for Fresno State.
Tarkanian went on to coach the Long Beach State team in 1969 while not yet 40 years old. He coached there for five years and led his team to the N.C.A.A. tournament four times, winning 99 of 116 games. Fans and players cheered, but the sport’s ruling body decided there must be something fishy about this upstart’s extraordinary success.
He’d moved on to the University of Nevada at Las Vegas before the N.C.A.A. decided Tarkanian had been cheating. The same accusation recurred throughout his career, as Tarkanian and his teams were intermittently suspended.
The most serious and lingering complaint against Tarkanian was that he recruited players with questionable academic credentials. It’s a charge that goes to the very core of college sports as a vital part of a young person’s education and not as some sideline venture designed to raise money and inflate a school’s profile.
Oh, wait: Isn’t that what college sports became a long time ago? Does anybody really think college basketball players—or football players, or baseball players—get recruited because they’re really good at quantum physics?
I don’t know where the N.C.A.A. draws the line between athletic prowess and intellectual achievement, or even if it should. What I know is that despite the controversies and harassment, Tarkanian transformed a UNLV team once jokingly called the Tumbleweeds into a college basketball powerhouse known as the Runnin' Rebels. They won the N.C.A.A. championship in 1990 by the biggest margin ever.
The next year, the N.C.A.A. came down hard on Tarkanian and the school. Tarkanian fought back even harder. He insisted, as he always had, that he’d never broken the rules. He sued the N.C.A.A. Six years later, they settled up and paid Tarkanian $2.5 million.
By then he’d moved home in a very real way, to coach his old team at Fresno State. His old community embraced him in a way college basketball never did.
Tarkanian retired from coaching in 2002, embittered by his experience with the sport’s ruling body. “They’ve been my tormentors my whole life,” he told a news conference. “I’ve fought them the whole way. I’ve never backed down.”
Anyone who knows Armenians could have told the N.C.A.A. from the start that he never would.
Posted by Douglas Kalajian at 11:18 AM