Iris Chekenian's remarkable achievement: Restoring her father's voice for a new generation of readers as well as for herself


I first read the book My Name Is Aram when I was a boy. After I finished, I told my father I wanted to be just like William Saroyan–the best Armenian writer in America.

“The best Armenian writer in America is Aram Haigaz,” he said. 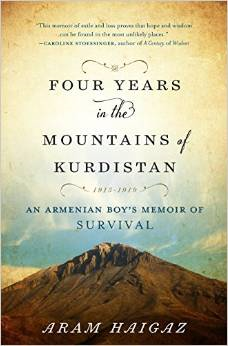 When I asked him to explain, my father pointed to his shelves of impenetrable Armenian books.
“When you learn to read Armenian, you’ll understand.”
I never did, but the name stayed deep in my memory until after my father died and I began my long search through his books and papers for clues to his thoughts and life. In a very old and tattered copy of The Armenian Review, I found one of the few Aram Haigaz stories that had been translated into English.
It was a tale of two Armenian boys who survived the Genocide by converting to Islam in order to take shelter with a Kurdish tribe. Their experience paralleled what I knew of my father’s life after his grandmother snatched him from her dying daughter’s arms and gave him to a Kurdish chief.
Through this autobiographical story, Haigaz let me peer into a mysterious realm that was absent from the many Genocide histories I’d read. It also offered powerful testimony that that the Armenian identity may be obscured but it can never erased as long as any of us survive.
When I wrote my own memoir about my father, I included an extended reference to this story and its author and then tucked the name back into my memory. It jumped out again a few weeks ago as I began preparing to represent the newly formed American-Armenian Writers Guild at the London Book Fair.
One of the just-published books to be featured at the fair’s Armenian Pavilion is Four Years in the Mountains of Kurdistan by Aram Haigaz, translated into English by his daughter Iris Chekenian.
It is a remarkable book with an even more remarkable story behind its publication nearly 30 years after the author’s death.
Aram Haigaz is the pen name of Aram Chekenian, who was 15 when Turkish troops approached his native Shabin Karahisar in June 1915. The Armenians climbed to a mountain fortress and held off the attackers for nearly a month.
Chekenian and his mother were among the few who lived through the siege, only to be forced to march toward the desert and certain death. At his tearful mother’s urging, Chekenian saved himself by declaring his new-found faith in Allah and adopting a Muslim name. Like the boys in the story I read, he began a new life as a Kurdish shepherd.
His masters were certain the boy’s conversion was sincere but they were wrong. He ultimately escaped and made his way to America. There he began yet another life, but this time with two distinct dimensions and identities.
To his American friends and neighbors, he was Aram Chekenian, hard-working father and husband who earned a living as a photoengraver at the New York Daily Mirror. To Armenians around the world, he became Aram Haigaz, whose writing stood as lasting testimony to the truth of the Armenian Genocide.
He ultimately wrote 10 books, but only the first was published in English way back in 1935. He wrote all the rest in Armenian. As I read about the new English-language edition of his memoir, I was startled to discover that his daughter Iris was among the many American-born Armenians who’d never read the book while her father was alive.
Like me, she didn’t read Armenian – and like my father, hers didn’t tell his story easily. So Iris went about her own very busy life of accomplishment as a Hollywood story editor and public relations professional knowing little about the events her father chronicled.
In an interview with journalist and author Deborah Kalb, Iris recalled standing in her father’s library after his death in 1986. She couldn’t so much as read the titles of the books he’d written.
Determined to unlock the literary and historical treasure her father had left, she began to study the Armenian alphabet but soon discovered that her conversational Armenian skills didn’t prepare her to understand her father’s idioms and obscure references to Turkish and Kurdish culture.
In reading as much as she could, Iris became convinced that her father’s work was important documentation of largely untold history. She devoted years of study, research and consultation necessary to translate his most important book for a far wider audience.
I started reading it this morning but I’m already certain Iris was correct in her estimation of its importance.
Scholars are just beginning to assess the unknown number of Armenians who survived the Genocide by allowing their identity to be obscured. Many grandchildren of those children live today as Turks or Kurds, some knowing their roots but still afraid to reveal them.
Four Years is a rare document by one who survived as an Armenian with the determination to speak the truth and the ability to express it eloquently.
I was hoping to finish reading the book before I leave for London later this week, but it is too rich to rush through. I’m overwhelmed not only by the story but by the scope of what Iris has accomplished.
For many Armenians, her father was the voice of his generation. Now that voice can be heard by every generation of Armenian-Americans to come.
Posted by Douglas Kalajian at 5:26 PM