Silence was my father's only shield, and it worked for both of us better than I ever understood 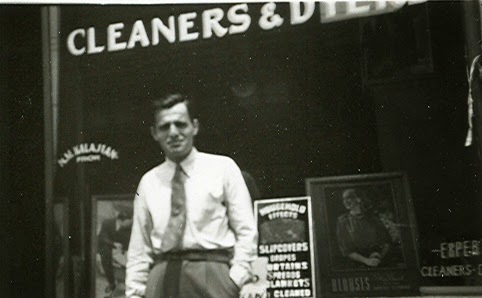 The photo at left was shot in the late 1940s, a few years before I was born.

That's my father, Nishan Kalajian, standing in front of the dry cleaning store he and my mother bought when he came home from the Army after the Second World War.

I don't know anything about the picture beyond what I can see, but I see enough—and know enough—to understand that Dad was mighty proud. His name stenciled on the window next to the word "proprietor" is a sure sign that he was feeling good about being his own boss for the first time in his life.

Even better, nobody was trying to kill him.

Understanding my father's tortuous and tortured journey from Diyarbakir, Turkey to New Jersey would have been less challenging if he'd been willing to talk directly and plainly about what he'd seen and experienced. Instead, I had to settle for the occasional revelation that would appear in a flash and disappear just as quickly.

I pieced together as much of my father's life as I could in my book Stories My Father Never Finished Telling Me. But understanding his experience proved to be even more difficult than reconstructing it.

I'm always wary of lapsing into solipsism, but nothing in my childhood in America prepared me to relate to what he'd known in a far more dangerous and desperate part of the world.

Dad watched as his homeland was consumed by genocide and famine. I watched Hopalong Cassidy and ate Twinkies.

By the time I came along in 1952, my parents were on solid footing as small-business owners. They'd bought a bigger store that came with a house, and Dad even rented a garage down the street to park his big, new station wagon. That Plymouth was a fitting metaphor for my smooth ride down life's highway.

I was reminiscing about all this with my father's cousin Gloria Allum the other night. Although Gloria also grew up in New Jersey, she's older than I am by enough years to have experienced a time when life for our family and other Armenians was far less settled and secure.

Her father, like mine, rarely talked about his youth and left even fewer clues about how or when he made the leap to America. But Gloria saw the lingering effects of trauma all around her in a community of immigrants struggling to adapt to America while also struggling to surive economically.

Some struggled harder than others. She recalled one close relative whose alcoholism affected the entire the family. As a child, she was embarrassed and angered. Looking back she understood much more and she empathized.

"It was all from the massacres," she said. "They had to deal with so much."

I wish my father had told me more about his life but now I understand that silence was his way of dealing with the pain. I also understand that he was doing his best to protect me from the effects.

I wish I'd understood that in time to thank him.

Posted by Douglas Kalajian at 1:49 PM