In Montgomery, Alabama, history is so close you can touch it but you can't always see it clearly


My friend and co-author Denny Abbott lived the story behind his memoir They Had No Voice: My Fight For Alabama's Forgotten Children. I got the easy end of the deal when he asked me to write the book.

Denny's legal war with the State of Alabama on behalf of poor, black children more than 40 years ago fascinated me, in part because it turned on a series of decisions that showed great courage as well as unusual moral clarity.

But hearing Denny's tale also opened a window to a time and place that signaled a significant change in our country over the past century.

Denny grew up in Montgomery, Alabama. For a guy like me from New Jersey, that seemed as exotic as Bangkok and just about as difficult to imagine.

Denny's childhood in the 1940s and '50s traced the decline of the Old South and the rise of the Civil Rights Movement. Montgomery was at the center of both, and Denny got a close-up view of this seismic shift in culture and law.

As a young man, Denny listened nightly to his father's racist rants. As a young adult, Denny watched from his office window as the Rev. Martin Luther King Jr. marched along the street below.

Denny respected his father, but he followed Dr. King's example.

Listening to Denny, I was struck by the pride he showed in his Southern identity despite his break from traditions we Yankees associate so closely with The South. I asked him why he still felt such attachment to a place that had caused him real anguish.

Denny said I'd just have to go back to Montgomery with him to understand.

Meeting our publication deadline kept that from happening until earlier this year when Denny and I were invited to speak about the book at several campuses of Troy University.

I'm going to write about that in some detail soon, because the experience was emotional, even inspirational. So was our tour of Montgomery, a city where the past and present meet head-on but never quite connect.

Our walk began at stately Union Station, an old red-brick rail terminal that now houses a visitor center where reminders of the city's economic and historical importance are showcased.

The narrator of the city's welcome video boasted of Montgomery's "two" rich histories as the original capital of the Confederacy and as a pivotal Civil Rights battleground. We encountered reminders of both everywhere we went. 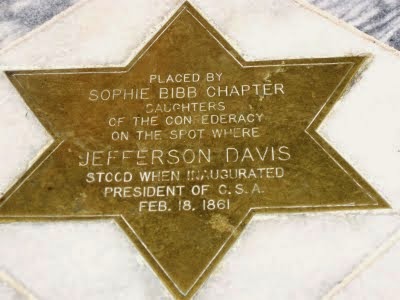 Among the most striking was a statue of Jefferson Davis atop the steps of the state capitol, which is a white-columned monument to the city's antebellum grandeur. Denny led me up the stairs to stand over the gold star that marks the spot where Jefferson Davis took the oath as president of the confederacy on March 9, 1861.

In March 1965, Dr. King led thousands of men, women and children to those very steps after a 54-mile march from Selma. The event is recognized as a landark of the Civil Rights Era.

That march took five days, but Dr. King's march through Montgomery's history had begun years before. Among his notable achievements there: he led the Montgomery Bus Boycott, which ended segregated seating in 1956.

There was no statue of Dr. King at the capitol, however, nor anywhere else we stopped.

Our most informative stop was at the Southern Poverty Law Center's civil rights memorial, but I also learned a lot just walking through downtown where historical markers illustrate the city's long and deep racial divide.

You can follow the trail if you read them all and read them carefully. If you don't, you might not realize there is a trail at all.

As Denny and I left Union Station, we walked through a short tunnel under the old train tracks to the waterfront along the Alabama River. It was a pleasant stroll on a bright, cool morning.

Reading the markers, I learned that same waterfront served as the arrival port for countless slaves, who were marched to holding pens to await auction at Court Square a few blocks away.

Our short tour nearly overwhelmed me with images from Montgomery's past. Over the next few days, I learned much more. I met a great many people who were all gracious and helpful, and who shared Denny's obvious pride in their heritage.

I left with a better understanding of that pride, but what I understood most clearly was that I'd been misinformed by the narrator of the video we watched at the beginning of our tour.

Like the rest of America, Montgomery does not have two histories. It has one history that is rich but also complicated. Some of it is glorious and some of it is awful, and that seems too much for many people to acknowledge.

Our nation's buses and coffee shops were integrated long ago. Why is our history still segregated?
Posted by Douglas Kalajian at 11:29 AM