I set off for the London Book Fair last month with only a shadowy idea of what to expect. 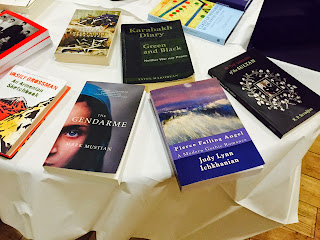 I knew mostly that books by Armenian authors from various countries would be  showcased at an exhibit called The Armenian Pavilion, and I’d have a chance to brag a bit about my fellow American-Armenian writers while showing off my own memoir.
The experience turned out to be far more enjoyable and enlightening than I imagined.
The pavilion resembled a makeshift gathering space in a small corner of a vast book shop. Hundreds of publishers, vendors and just about anyone else involved in the international book trade had gathered in the cavernous Olympia exhibition hall, and it seemed they were all talking at once.
Our pavilion without walls was open to the crowds, but also to the din. Conversation was challenging, and author readings were equally frustrating for speaker and audience. The whole thing might have been too much trouble, except I was learning a great deal and enjoying myself immensely.
The variety of books on the Pavilion’s shelves was impressive: historical novels, romance novels, children’s books, plus many memoirs and other nonfiction works. Clearly, Armenians think and write about much more than the Armenian Genocide.
But the Genocide was certainly the predominant topic, as the event took place a week before the 100-year commemoration. Regardless of topic, every word written by an Armenian author since the Genocide is homage to the writers who were silenced on April 24, 1915.
I met a number of truly thoughtful and talented people who have found interesting ways to tell the story of Armenian life before and after the Genocide. Three of my British counterparts deserve mention.
***


Eve Makis stood out because she is not Armenian. Her parents are Greek Cypriots who moved to England in the 1960s before she was born. She’s a journalist-turned-novelist who has moved between Britain and Cyprus several times.

I know too well that the Armenian Genocide isn’t widely understood in the United States, but I was surprised to learn that Eve knew little about it until a few years ago when she began outlining an idea for a new novel set in Cyprus. She knew of the Armenian community there and decided to add some Armenian characters.


She followed her journalist’s instincts and interviewed Armenians to get a realistic picture of their community. That’s when she learned they’d come to Cyprus after being expelled from Turkey. When she understood the scope of the disaster, she committed to making it the center of her story, and she delved deeper into Armenian lore and culture.


The result was The Spice Box Letters, a novel about a journalist who sets out to learn the story of her recently deceased grandmother. She begins with a few scraps of paper found in a spice box. They were written in Armenian, an unfamiliar language from an unfamiliar place.
Her discoveries about her grandmother, her family and her own life reflect the theme of loss and silence that I explore in my own book. The Spice Box Letters is smart, engaging, and often funny – and the author’s observations about Armenians are remarkably on target.

R.P. (Rubina) Sevadjian grew up in Ethiopia, where her family settled in the Armenian community that began to develop before the Genocide as a result of previous waves of persecution under Ottoman rule.
Sevadjian had several important goals when she wrote In the Shadow of the Sultan. She wanted to memorialize the culture of Western Armenians that is fast disappearing even in the diaspora while also showing that the destruction of that culture began before 1915.

Most of all, she wanted to introduce this culture and history to young readers—a challenging target for any author, but a special challenge when the subject matter is so brutal.
The story, set in 1896, is simple but powerful: A boy is thrust into manhood when his father is killed by a Turkish neighbor. He has no time to mourn, as Turkish swords are in the air throughout his village. He sets out to find his mother but finds only devastation and is forced to make choices about his own survival and the survival of his nation.
I’m a few years beyond the demographic of choice, so I don’t know how a young adult reader would react. But I like the book an awful lot, no doubt in part because I like the author—and I deeply admire her commitment to historical accuracy and to telling an important story that  is too often ignored.

***
I was aware of the Armenian connection to Ethiopia, but I was floored to find that George Jerjian was born in Khartoum, Sudan, which to me existed only in
black-and-white movies of the 1930s.
The circumstance fits perfectly with the experience of a people scattered around the world, but his family’s location was the product of extraordinary achievement rather than sudden displacement.
George’s paternal grandfather, George Djerdjian, was born in Arabkir in 1870. His parents sent him to college in Erzerum, and he did so well he won a scholarship to continue his studies in Zurich. He returned in 1900 with a doctorate and a camera.
While teaching at Sansarian College in Erzerum, Dr. Djerdjian returned to Arabkir each summer to take photographs. A chemist, he was able to develop his film and he carefully preserved the glass-plate negatives. He stored them in Alexandria, Egypt, when fellow Arabkir natives offered him a job in their Sudan business.
Dr. Djerdjian died in 1947, and the plates were eventually shipped to his family in Khartoum. They somehow survived several more moves. The journey of the plates and the family continued into George’s day, as unrest in Sudan led to relocation.
When George’s father died in 2003, the plates turned up intact in a box in the family’s London apartment. George recognized their importance. He has donated them to the Genocide Museum in Yerevan, and has now compiled 100 of the prints in a book: Daylight after a Century.
The word remarkable is overused but it is appropriate in this case. These photographs, crisp and well-focused, document not only a community but a way of life that no longer exists. We see people in their homes, their schools, their churches. We see their faces, and we can glean a good deal about their lives while knowing what they couldn’t know about what lay ahead.

You can see many of these photos and hear George’s narration on YouTube. I saw the video at the book fair and had the added pleasure of meeting George. Although I returned from London with a long reading list, I was so engaged by his thoughts that I clicked another one of George’s books into my Kindle as soon as I got home.
The Truth Will Set Us Free: Armenians and Turks Reconciled, tells the story of George’s grandmother, who was saved during the Genocide by a Turkish official. The story became more powerful when he learned that the official was responsible for the deaths of many other Armenians.

The book goes on to lay out the history of the Genocide, sharply and directly. He argues that Turkey should acknowledge the truth, and explains why he believes that will happen. I thought the reasoning and writing were both powerful. Also impressive: the foreword was written by former Sen. Bob Dole, who has long been friendly to the Armenian case.
When I relayed those thoughts to George the other day, I was still digging through back issues and catching up with chores that piled up while we were away. Soon after, I came across a recent story in the Armenian Weekly about a visit to America by Ragip Zarakolu.
The story explained that Zarakolu is a Turkish intellectual, publisher and human rights activist who has long been at odds with his government. He served time in prison in the 1970s after being declared “subversive.”
The sentence didn’t deter him from campaigning for freedom of speech in Turkey. He not only spoke publicly about the Armenian Genocide, he did something even more incendiary: He translated The Truth Will Set Us Free into Turkish and published it.
He was convicted of “insulting the state” and again sentenced to prison. The sentence was eventually reduced to a fine but he is still appealing his conviction.
I know quite a few authors, some very successful in the ways we usually think of success. George is the first author I’ve met who wrote a book so powerful that someone was willing to risk time in a Turkish prison so others could read it.

I can't think of a greater achievement, or more fitting homage to our martyred writers.

Posted by Douglas Kalajian at 7:47 PM