Impressions abound in The Trip To Italy, but not the impression Lord Byron left on Armenians 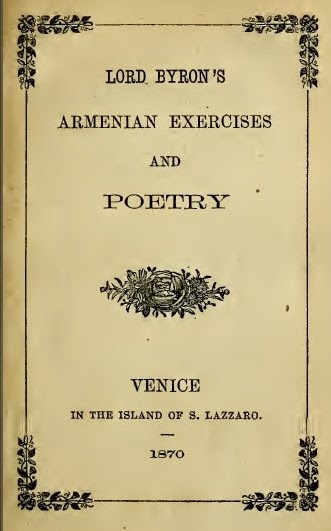 My wife and I took an afternoon off to see The Trip To Italy. It’s the sequel to The Trip, which also starred British comedians Steve Coogan and Rob Brydon.

They are odd films: no vampires, no zombies, no comic-book villains from space. That suits me just fine.

Both Trip movies share a simple set-up: Coogan and Brydon are commissioned to take a dining-and-travel tour. Along the way, they engage in an ego-driven competition to top each other’s impressions of famous actors and movie scenes.

They often perform the same scenes over and over. The effect is sometimes hilarious, sometimes annoying—and frequently both.

If you find Brydon’s Pacino voice grating, you could wear earplugs and still enjoy The Trip To Italy because the scenery starts off gorgeous and keeps getting better as they wend their way from Genoa to Tuscany and along the Amalfi Coast.

But then you’d miss the witty historical and literary allusions sprinkled among the Godfather and James Bond references.

The Italy trip is framed as homage to Percy Bysshe Shelley and Lord George Gordon Byron, who wandered these same paths together a couple of centuries earlier.

As a long-ago English major, I instantly recognized the importance of these two giants of English poetry—and as a true American, I couldn’t remember a thing either of them wrote.

But I did remember one fact that the screenwriters either didn’t know or didn't find interesting: Lord Byron spoke Armenian.

This is not a small point, at least to me. I don’t speak Armenian, although my parents did—and as did everyone in their lines from antiquity on until I came along.

I’ve always used the excuse that as a writer, English deserved my undivided attention. The Byron example shoots that all to hell as he’s considered one of the greatest poets in English history.

I take solace in this, however: Byron had time to study Armenian without intrusion because he was on the lam. The Romantic poet was a bit too romantic for the England of his day, and he sailed to the Continent for a respite from scandal.

He found inspiration as well as solitude in Venice in 1816 when he discovered the Armenian monastery on the island of San Lazzaro. A group of Armenian Catholic monks had established themselves there the century before to carry on their own work in exile.

The Mekhitarists, named for their founder, dedicated themselves to preserving Armenian culture outside the hostile environs of their occupied homeland. They translated classical Armenian works into European languages, and European literature into Armenian. Among their most valuable contributions to the world was the restoration of ancient Greek texts that existed only in Armenian after the originals were lost.

The monks also welcomed students who had the discipline and determination to meet their high standards. Byron confessed that he was initially attracted to the intellectual challenge as a diversion, but he quickly became an enthusiastic admirer of the Armenian people and their language.

“Whatever may have been their destiny–and it has been bitter–whatever it may be in the future, their country must ever be one of the most interesting on the globe, and perhaps their language only requires to be more studied to become more attractive.”

Byron noted that some Armenian students had difficulty mastering the written language (“a Waterloo of an alphabet”) but he became so adept that he translated Armenian historical writings and the Epistle of St. Paul to the Corinthians into English—and he wrote poetry in Armenian, introducing the Western form to Armenian poets who followed.

He remained in San Lazzaro until the next year before moving on to Rome, where he completed some of his finest poetry. His friend Shelley joined him in Italy, and they rented a house on the coast south of Genoa.

Their Italian adventure ended tragically: Shelley drowned when his boat overturned in 1822. He was 29. Instead of returning to England, Byron headed to Greece to join the war for independence against the Turks.

I wonder if he was inspired by his study of Armenian history, which led him to conclude that “the pashas of Turkey have desolated the region where God created man in his own image . . .”

Byron lent his fortune as well as his life to Greece, where he became ill and died in 1824 at age 36.

He is honored by Greeks to this day, and by Armenians. A portrait of Byron hangs outside the room he occupied in the monastery of San Lazzaro, where the Mekhitarist fathers continue to do their holy work.

A plaque at the entrance honors this "devoted friend of Armenia who died for the liberation of Greece."

Posted by Douglas Kalajian at 12:45 PM